Wow! That was good wasn't it? Expo, I mean. 50 years? It seemed like there were nearly fifty layouts.
Well done to everyone who contributed in whatever way.
Now I know, I haven't blogged for what appears like fifty years. But so much gets in the way of modelling sometimes. Suitably encouraged by Expo, where Brafferton performed reasonably well for much of the time, I press on.
For Oxford, I painted two part backscenes to relieve the mass of hardboard that would have otherwise formed the backdrop. On my return, I've started using these to sketch out what the backscene really ought to look like: 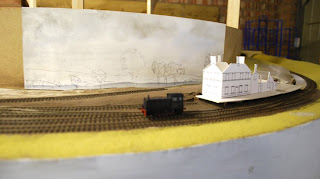 Also, the 04 finally got chipped and seems to be running well in it's new DCC state.
The legs on Brafferton were commented on quite a lot over that Expo weekend. These were substantially the idea of Edward who also helped with their construction. Indeed Edward and Alan Smith have contributed greatly to the legs and baseboard side of things on Brafferton; thanks for your support guys: 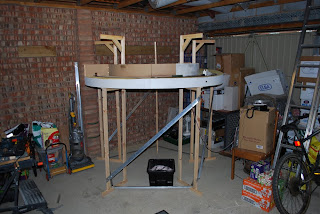 was imprseed by the running and the J94 do you have more details how you built it I know you took the time to show me the construction but where did you find the plan for the chassis?

Nick, I designed the J94 chassis myself. I stuck a depth gauge into the J94 body to work out the available area and then worked out gearing and hence motor position using Association tables. By trimming the frame of the motor, it sat down between the wheels and just squeezes into the body cavity.

Any chance of a diagram? I have at least one I want to do but haven't the faintest idea of where or how to start.

I'll try and knock together some sketches and photos when I have five minutes.

Please be patient though!...