This is my first “Blog” and the subject isn’t particularly fine-scale, however Mick assured me that my experiments with flush glazing might be of interest to some, so here goes!

The old Farish Poole era Suburban coaches are fairly generic, although the bodies appear to be based on LMS Period 2/3 designs.  Unfortunately the roofs are the wrong shape and the glazing is recessed so far that it looks like the coach sides are made from concrete blocks!  In an effort to improve this, I considered using a society LMS roof, but found them to be too narrow for the Farish body.  I then managed to acquire one of the old “Ultima” conversion roofs on Ebay.  These are actually Bullied roofs of the correct shape, however they have additional rain strips that need to be filed off before the torpedo vents can be added.

On the body, I filed 0.75mm off the sides and reshaped the ends to match the new roof, followed by a small amount of filling at the ends. I then used T-cut on the paint work, to make it look old and worn.

On the under-frame I removed the surplus V hangers and battery box, then added a voltage regulator and foot boards. I still need to add Society buffers, dynamo and vacuum cylinders. 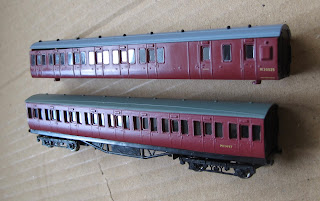 The glazing proved to be the most tricky aspect.  The window rebates on the coach are about 0.45-0.5mm deep, however they are also bevelled slightly. Consequently, if you use 0.4mm thick glazing material, you get an unsightly gap at the edge of the windows.  If you use a thinner glazing material and position it up against the rebate, the appearance is improved slightly but it is still far from flush.  I therefore decided to use Society 0.2mm cobex sheet but ignore the rebate and fit the glazing as close to flush as I could get it.  For the side windows I cut the sheet to: 5.35mm x 2.75mm and for the drop lights: 4.3mm x 2.4mm.  Cutting the cobex to size, within the required tolerance, was a challenge! I initially cut a 5.3-5.35mm wide strip with a scalpel then set a NWSL styrene “chopper” to cut at 2.75mm and cut up as many windows as needed, before doing the same for the droplights. I also found that the window opening have a slight curve at the corners so, to get a good fit, it is necessary to cut the tiniest bit of each corner of the glazing.  I then used model aircraft canopy adhesive applied by brush to the inside of the window opening and a cocktail stick with a tiny blob of blue tack on the end to position the glazing.  When the windows were all fitted and the glue had dried, I masked up the model and airbrushed the roof and ends.  At this point I should confess that the windows are actually double glazed - by which I mean I glazed them, accidentally ripped them out removing masking tape, then had to glaze them again! Doh!!  This time, after fitting the glazing, I painted “Klear” around the edges to make them more secure.

This is probably a good point to mention that I have been in contact with Brian Hanson at Shaw Plan / LaserGlaze. He has kindly agreed to look into the feasibility of producing some LaserGlaze flush glazed windows for these old Farish Suburban coaches. Whilst I appreciate that these coaches may be a bit coarse for most 2mm scale Modellers, knowing what an ingenious bunch you are, I thought you might find alternative uses for the flush glazing? And of course, if they are well received, there is nothing to say that Brian wouldn’t also produce them for us in different sizes too.

Finally, I added a bit of Dark Wash around the door frames and used some weathering powders on the foot boards and under frame. It isn’t quite finished yet, I still need to add a dynamo and vacuum cylinders as well as replacing the awful plastic buffers with some brass ones.

I have attached a few photos, including one  taken during construction that shows the difference in roof profile compared to an unmodified coach. 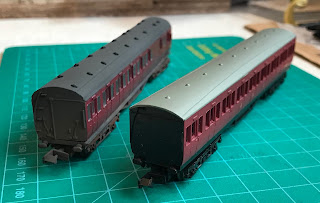 A good result and a complete transformation of Farish coaches.

I also like the look of this Andy - and I speak as someone who's put Gresley bogies under a pair of BR MkI suburbans to try to make them look a bit Thompson-ish! It's also a good example of the advantages of having the tool(s) for the job: I've just finished glazing a 3D print of the prototype Manchester Sheffield & Wath loco 'Tommy'. 15 windows in all and I found them a right pain, having to measure and cut them all individually. Having a gadget like yours that will cut the same shap over and over again makes all the difference.