This week I have been mostly devising uncoupling systems..... I like Microtrains knuckle couplers which I use on the outer ends of cuts of wagons (or even complete trains). In between I use whatever suits best which includes Kato non-automatic knuckles which are very small and unobtrusive and, on one set of 16T mineral wagons, DG because it's difficult to make anything else fit.
Microtrains use permanent magnets for coupling and uncoupling, but the magnets they sell are huge and can only be installed on straight track. I need to shunt trip workings in and out of a siding and colliery branch which are on a curve. So I began mucking around with small rare earth magnets. I found that 2mm diameter ones with a pull of 0.9kg (1lb in old money) work well. I used cyano to stick them in a row to a piece of microstrip. The sleepers were cut through and a section removed to take each strip and the strip fixed with two-part rapid epoxy. The picture shows the result. It all still needs painting and ballasting but I think that when complete it should be virtually unnoticeable. The Mictrotrains magnet is shown for comparison. 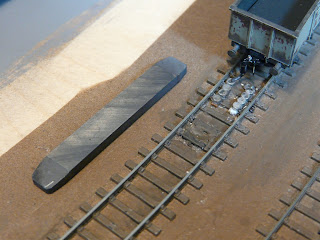 Two set of magnets will uncouple a pair of Microtrains couplers. But I have also begun experimenting with fitting locos with a 'post' of 30 gauge phosphor bronze wire. The wire projects from the bogie of a diesel of electric loco and bends up through 90 degrees so the upright is a couple of millimetres clear of the buffer faces. The Microtrains knuckle can then 'grab' the upright wire. One set of magnets will allow uncoupling. Thus system isn't foolproof and needs a bit more work to get it to be 100 percent reliable on curves and when propelling, but it does mean that you can fit all the bufferbeam details - including vac bags, hoses and m.u. connections and still have a working coupling.
Posted by Alan Whitehouse at 12:15

Suggestion -
Try the magnets slightly staggered from one side to the other. If you look at the Microtrains coupling arms in plan view, its the tips which are pulled, and the tips are not next to each other. So, slightly staggered magnets may work a bit better. (Did when I was experimenting with this sort of thing many years ago).
And experiment with a magnet outside the rails as well as inside, it moves the centre of the field out a bit further, so pulling the arm further.

Thanks Nigel... all good ideas. I've got the 'knuckle to knuckle' uncoupling about 95 percent reliable, but another set of magnets might be a good thing to try.
And let's face it, I'll NEVER get the hang of this metric malarkey!