Apart from one or two loco related chassis rebuild projects, of which more later, I have also been forging ahead with my original plan to motorise the explosives siding gate on Callaton. I'd thought about a hand cranked system involving wheels, gears and very manual handle, which would have been quaint, but because I had not been able to devise what I really wanted a chance encounter with a MERG Pocket Money kit started me off on a different route. Through the good offices of a friend I bought a couple of these and found the kit relatively simple to put together - alright, I need to improve my electronics soldering technique but I do have a result. This little board allows control of a servo throughout 180 degrees and also has two controllable end stops. At around £1.50 the cost of the kit is negligible but it does do exactly what I want it to do. If MERG offered taster kits like our 2mm Scale Association sells wagon starter kits, this would attract many more new members to their ranks; as it is I don't think they do. Anyway, as a direct result of putting this together I may very well re-join some time soon.

The first two pictures below show the completed MERG board front and back. You now see why I say I have to improve my soldering of 'stripboard' as it's called. 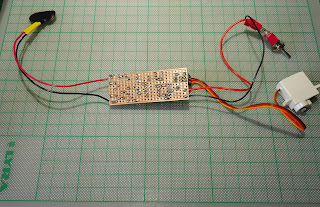 The second shot shows the components on the other side of the board and at this stage on the left of the board is a servo and a switch. This is a SPDT acting as an on/off switch. On the right is an adapter that enable attachment of an AA battery pack loaded with 8 x 1.5volt batteries; for test purposes a 9 volt PP3 type would be just as good but not last for very long. In use I notice that even a stack of 8 x 1.5 AAs doesn't last too long either but if a separate switch is included, once the unit has done its bit it can be switched off until needed next time with no drain on the batteries. 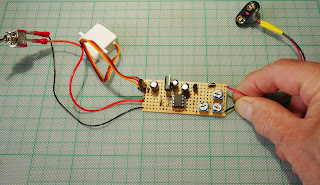 Below is the result. I could take a picture of the below baseboard level gubbins but it really is quite simple. A gear wheel is fitted to the servo shaft instead of an arm and it meshes with a gear wheel on the gate post which is running in a long brass tube. There will be many more ways of doing this but this is what I have at present. I've ordered some pulley wheels and drive belts from Nigel Lawton's website so I'll be doing some more experiments to see which I prefer.

See what you think,
Mick S.

Looks great Mick. Funny the batteries have such a short life, eight cells store a reasonable number of milliwatthours*, the power must go somewhere, and if nothing is getting hot there must be a low continuous drain from, I suppose, the servo. If you disconnect the batteries between shunting operations, do they still run down as fast?