Now this isn't in the Bob Jones league at all, but attached (assuming I can work out how to do this) is a picture of my own latest signal, a disc with route indicator box. The disc works, the indicator doesn't! It's a marriage of two N Brass kits. The signal itself is from a fairly recent new release from Nick Tilston. They are sold as non-working, but the construction method easily allows the disc to be pivoted. I had intended to solder a small washer into the rear face of the disc as a locator for the operating wire. But in the end decided to cheat and use one of the two spectacle holes instead. This works up to a point because the spectacles are so close to the edge of the disc that any force on the operating wire is liable to tear the disc. So I soldered a crankpin washer over the hole to take the strain and now it works fine. The kit provides for four signals and, even allowing for ham-fistedness and incompetence I got two working and one static signal from the etch. 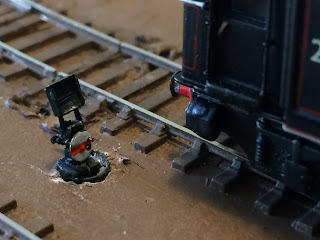 The indicator box is another N Brass kit with the legs soldered into the top of the disc signal. The real thing would direct you from a siding either into a colliery branch or the Down Main. The disc is operated by a servo under the baseboard.  The whole thing is soldered onto a 10mm length of brass tube which in turn fits a 5mm hole drilled through the baseboard.
The corner of the loco cab you can see is an attempt at 26000 'Tommy', the prototype Manchester Sheffield & Wath locomotive, done from a 3D print.
Posted by Alan Whitehouse at 11:58

You say how it fits into the baseboard but is it easily removed for track cleaning? I'm sure there should be a way to get the indicator to work!

Whatever - a nice touch to have a working ground signal.

Not really for track cleaning, although that's a possibility, more just a convenient way of fitting both signal and an aperture for the operating wire into the same hole. I think it will make fitting the signals (all of them) and linking operating wires to servo horns easier. We'll see..... This is one of those things that you would not logically do because the movement of the disc will be barely perceptible... but it is nice watching it happen!