Geoff Hodson asked a question regarding ballasting and I answered in the comments section of his posting. Briefly it's artist water colour paper cut to size and laid between the Easitrac sleeper base in a bid to represent neglected track which has been almost buried by 'muck'- equally it could be used to represent North Eastern ash ballast, but if you have a large layout this could be a tedious and lengthy process - worth it though if you have the time!

Because a picture is worth a thousand words, here is a shot of the entry to the explosives siding on Callaton. Taken from the bridge that carries the disused incline it's probably about the only shot I have ever taken from this angle but it illustrates how an effort has been made to differentiate the ballasting in this area from that on the 'main line (which is silica sand) and can only just be seen behind the excellent spear-point palisade fencing that Bob etched for me and further beyond the gate access to the siding. In fact the 'main line' is flat bottomed rail whereas the siding is bullhead - not that you'd notice from this distance. 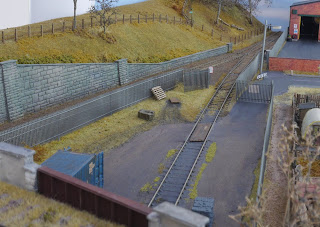