It's been a while!

Hello again all, and hoping everyone is well and keeping safe in these unusual times!

It certainly has been a while since I was on here, and having just had an e-mail from Mick offering to reinstate me I have jumped at the chance. Mind, I needed Mick's help to remind me how to get a posting done!
A replacement signal gantry for Fence Houses (FH) has been occupying me lately, involving some 35 hours to get to the state shown here, and that does not include designing the etch in the first place. Still it's specific to a location on the real FH and so to me anyway it's been worth the effort. 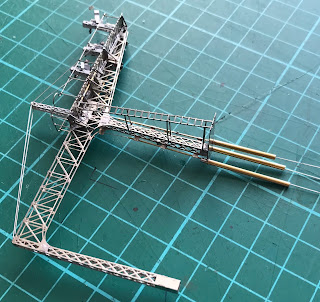 Any of you that have seen FH on the exhibition circuit will no doubt be thinking what's he on about, the gantry has been on there for years......... ah, well there lies a tale.
This latest gantry is in fact the third one to be constructed! First came a 'static' non working model while I sought a way of getting the arms to move whilst being so far away from any operating wire running up the main post of the supporting structure.
Having 'borrowed' the idea from a posting on RMWeb by I think, master model signal maker Steve Hewitt, I incorporated some horizontal brass tubing that takes 0.2mm diam. (number 8 guitar string) operating wire with a soldered on crank at each end. One crank connects to the vertical push/pull wire (also partly in tube) from a below baseboard mounted servo motor, and the other crank to a similar vertical push/pull wire connected to the signal arm.
A short length of the 0.5mm o.d. tubing can be seen in the photo running under the gantry platform from the main post to the left hand signal. The middle and right hand signals are similarly operated from separate tube lengths on the opposite side of the gantry (see another photo below).

My second attempt at the gantry used the same etch as the first non operating one, with the addition of scratch built cranks and holding brackets for the tubes wherever I could get them to fit in and around various parts of the main structure, and this is where 'the rot' set in!
Only one run of tubing was actually horizontal with the other two set at angles to be able to fit in. The trouble that soon manifested itself was due to me trying to 'make do' with an etch that did not allow proper adjustment of wire and cranks from the outset. It worked for a while but then both of the smaller dolls started to fail, partly from ill fitting connections and partly poorly constructed crank settings. Ironically the taller of the three signals (farthest from the main post) was the only one that did not fail at all!

And so to the third, and hopefully final gantry revised etch, purpose designed with custom fittings and anchor points. I salvaged the original signal arms from the second etch and a couple of the 0.5mm o.d. tube lengths as I was getting short of this stuff, but everything else is new. 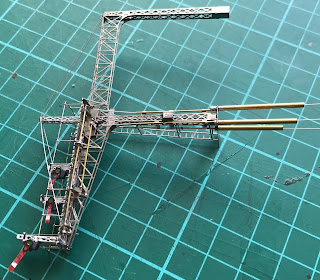 Above is the other side of the model showing the remaining two horizontal tubes holding the operating wires with their connecting cranks. The three lengths of 1.5mm diam tubing are there to guide the wires securely through the 12mm thick MDF baseboard material. The three different lengths indicate which signal arm is involved........handy to know when you are under the baseboard and cannot see which wire is which!

The gantry is nearly ready for painting now, but as I'm about to start a two arm bracket signal I may as well wait till that is built and paint them both together.
The bracket is another replacement etch for similar reasons as the gantry, operating wires jamming each other and failing to move the arms properly. In fact one of these jammed wires caused a servo motor to burn out with it's plastic casing actually melting in the process.

Stay in, and happy modelling.
Bob.