In these difficult and extraordinary times Mick has cast the net for contributors to this blog wider than usual (Thanks Mick). That explains why I, a southern interloper, am writing about my current projects. It's not all bad though because, despite my modelling being focussed on the Cheshire Lines Committee in Manchester in 1950, on my workbench at the moment are several Darlington products: a B16; a Q6; and a J39.  The first two are nearing completion and the last is being refurbished - it was my first complete 2mm kit.

The B16 is a shot down version of Stephen Barnfield's 3 and 4mm etch which Mick arranged a number of years ago:

I've gone for simplicity so there is a 38:1 worm combination driving the middle axle requiring a slice out of the boiler beyond the firebox to accommodate the worm. Clearances around the splashers are very tight and if I was starting from scratch I'd move them out a bit. It still needs the bufferbeams painting red, smokebox numberplate adding etc, but it's getting there. I learned to roll a boiler for the first time while building this kit, but following Mick's approach this is soldered to an internal brass tube for strength (and to keep it vaguely cylindrical if I'm honest!). Boiler top fittings are modified N Brass items. Has anyone else built one of these?

The Q6, yes Selby Q6s appeared regularly in Manchester via Woodhead in 1950/1, is a Fence Houses kit with parts from another Stephen Barnfield B16 tender kindly provided by a friend.  I've used the Q6 kit tender chassis and running plate to provide the narrow valance  matching that on the loco and then used the SB etch to provide tender body and frames. 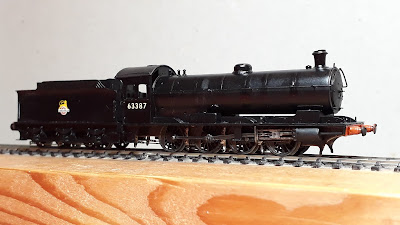 Bob's kit goes together rather more easily than the shot down B16 as you'd expect and has all the bits for an early Q6 with sandwich front bufferbeam. I've changed the dome and safety valves, and added a snifting valve for early BR condition. Smokebox numberplate, weathering etc still required.

The J39 is still in bits so no photos for now. My only change from the Fence Houses kit instructions has been to fit smokebox front steps like on the B16 and Q6.

Looking great, Simon. Well done. I must make a start on my kits (I have the same three).

Simon, what a cracking couple of models. The B16 is a belter and I do like the variation in Q6 tender.

They look great Simon, they will be welcome guests on the S&D any time.
Jerry