Today we were all treated to a tour of the main scenic feature on one of John Aldrick's latest projects - 'Ivybridge Viaduct' in GWR territory. The project is really rather ambitious but the manner in which he is accomplishing it is very neat. I understand an article is in preparation for the 2mm Magazine so I will not go into the why's and wherefore's in too much detail save to say that what has been adopted here is very much a multi medium approach, with resin casting, 3D printing, etched detail and traditional construction methods all combined to show a very realistic result.

The first picture shows the assembled NEAG bunch being attentive (as you would expect) with John just out of shot to the right and is the focus of our attention as he guides us through the various parts of his presentation.

The lower photograph is cropped and shows in a little more detail the how the viaduct is coming along. Ivybridge station building in its early stages of construction can be seen to the right hand end of the bridge.

Certainly one to watch...! 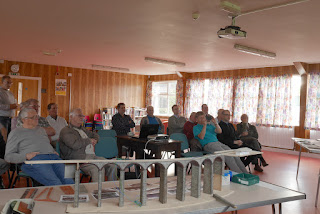