The north east group met yesterday for the first time since the 35th anniversary bash and were treated to a masterclass in point bending. Rod McCall showed us all how he uses his own method (as described in the 2mm Magazine) to bend a turnout to almost any desired radius, within reason of course. His starting pitch was to hand round a turnout that had been curved and asked the question "How did it start out" Everyone guessed wrongly because it started out life as a right handed turnout but finished up depicting a very slightly left hand curved.The process as descibed by Rod and illustrated in front of everyone is really simple and straightforward.

In the picture you see us all sat listening to Rod. Also most noticable behind him is the 2mm Scale Association new Road Show banner for the larger shows. Very impressive. 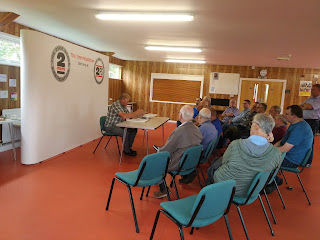 I suppose I should read the article, but what happened to just building them curved in the first place?

Looks like an episode of 'Detectorists'. Although to be fair with a better attendance.