The picture shows a reduced number of NEAG members (Due to Wigan show and other abstractions...!) being guided through the topic for the day by Martin. 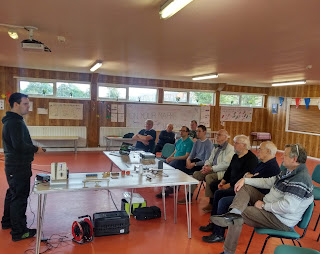 In addition to the innovative design of templates for constructing turnouts using flat bottomed rail Martin also displayed early examples of his laser cut servo mounting plates, and described the more expensive 3D printed versions which he does not recommend. He also had with him some interesting pieces of kit for controlling servos (MERG ones) and some very reasonably priced relays for changing crossing polarity. All together quite an interesting afternoon.

I've not placed any pictures here but there will be some eventually because as can be seen our own 2mm Magazine Editor was present and I understand there may be something in preparation for a future issue of the 2mm Magazine.

As aforesaid, while we were all enjoying the afternoon discussion/demo certain of our number were flying the flag at Wigan where as I understand things a sound decoder was purchased and fitted during the show. I'm hoping there may be some news of that here soon.

I have been conductiing my own experiments with sound and a small project type layout of very minimalistic proportions. I'll be posting some pictures here in the not too distant future so keep your eyes peeled...!