About 26 NEAG members (including the girls) turned out for our Christmas get together and as previously announced we were just having a day where personal projects were brought along to show others what we've been 'up to'.


Here are some pictures taken during the afternoon. The first three shots are just general views showing members taking absolutely no notice of the camera at all. Too busy enjoying themselves. 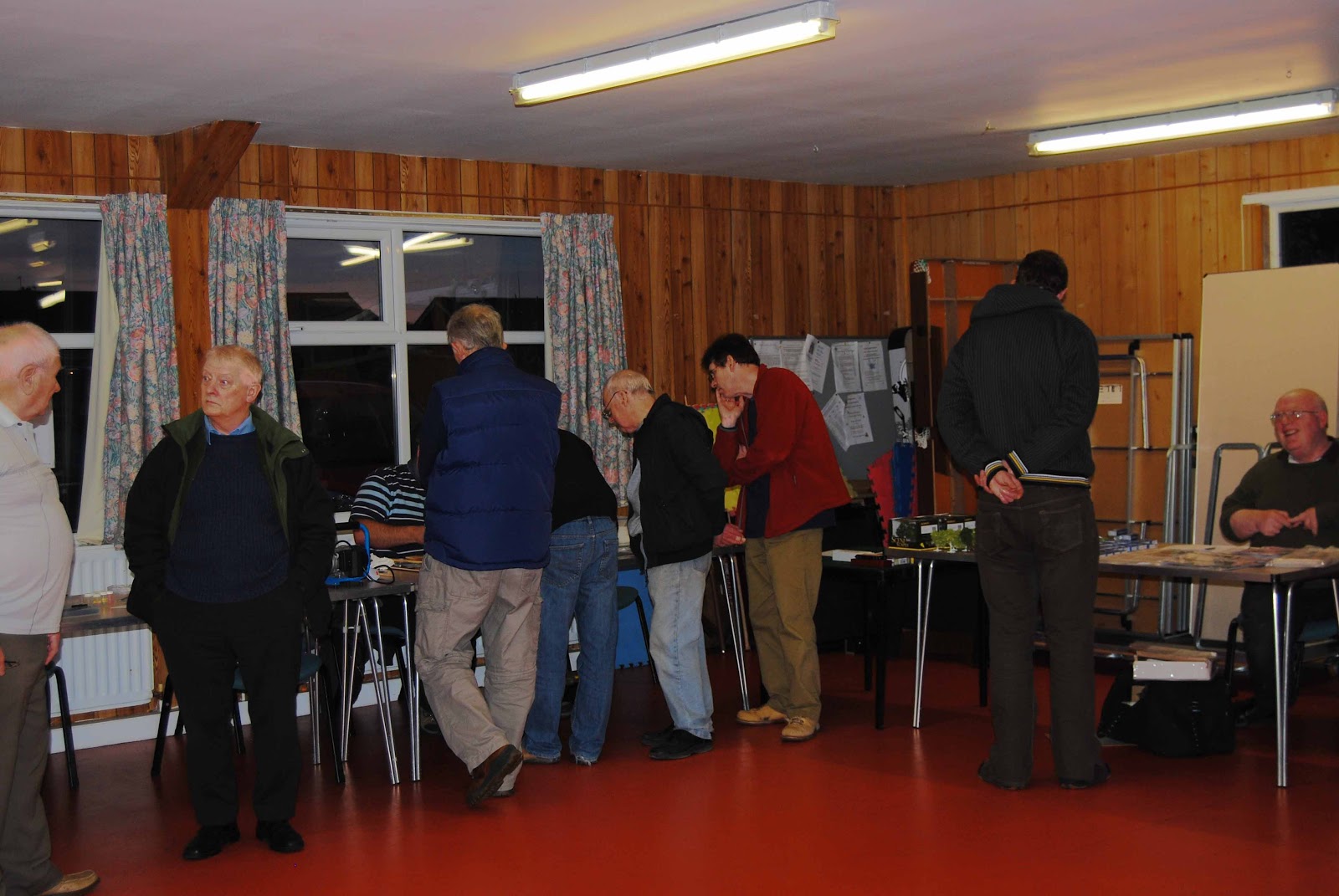 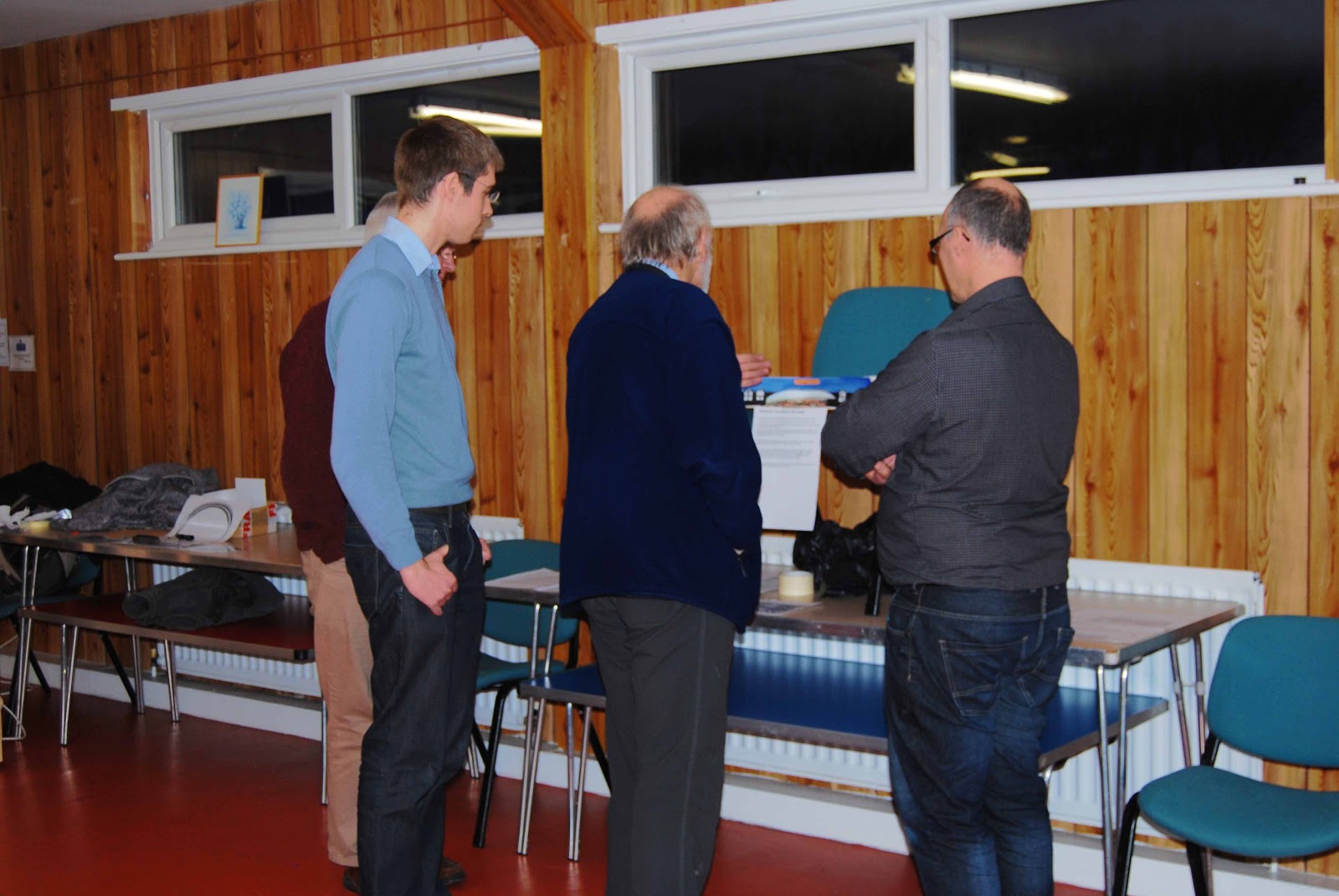 And then a couple took the opportunity to do a little modelling. First, Edward Sissling is working on a FMF brake van. Edward brought with him a couple of airbrush compressors for sale, one of which was a Proxxon. Anyone interested in buying one of these is invited to post a comment and I will put you in touch. Below Edward we see that Simon Perkins is working on - well I'm not 100% sure really, but he is working on something......... 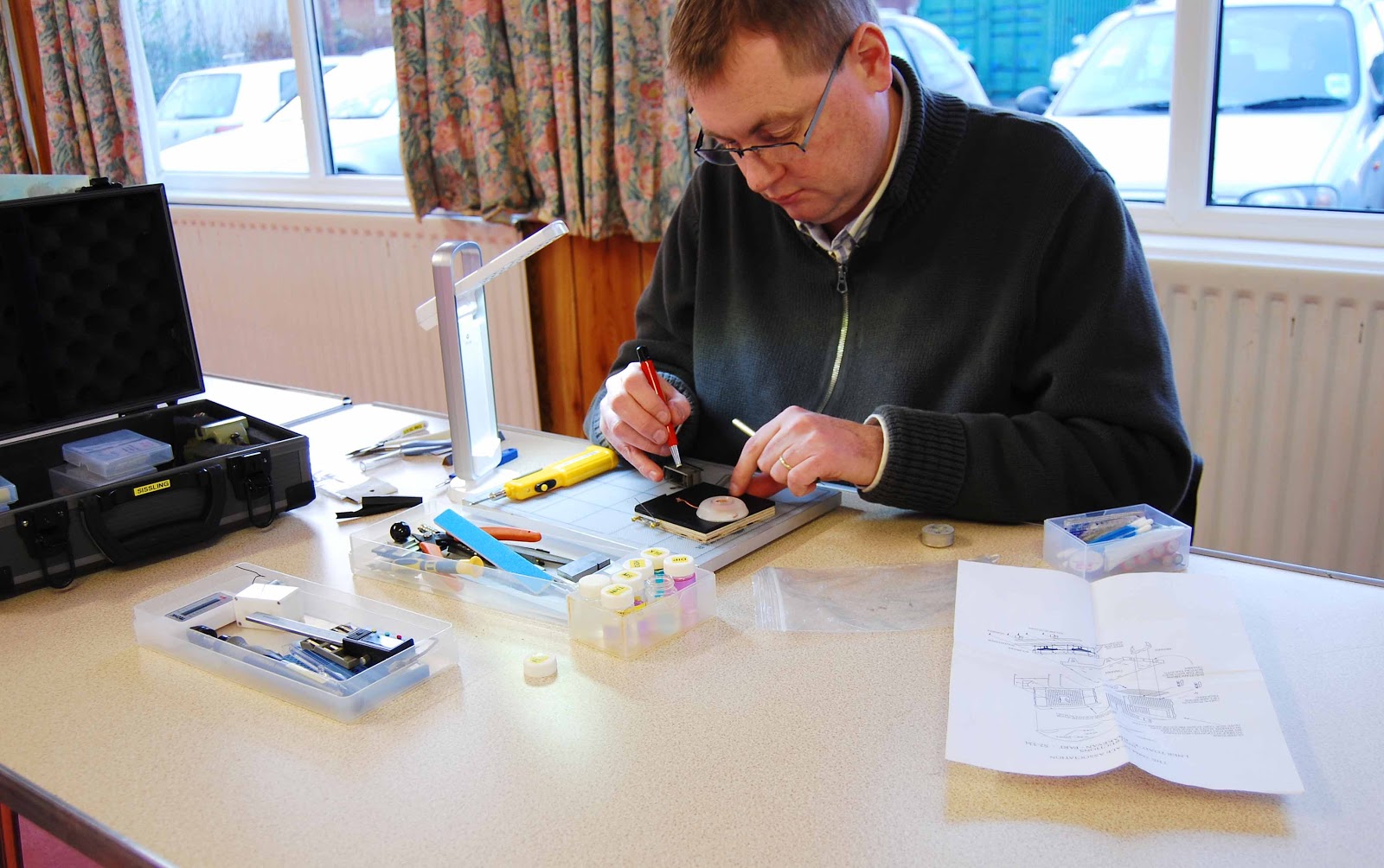 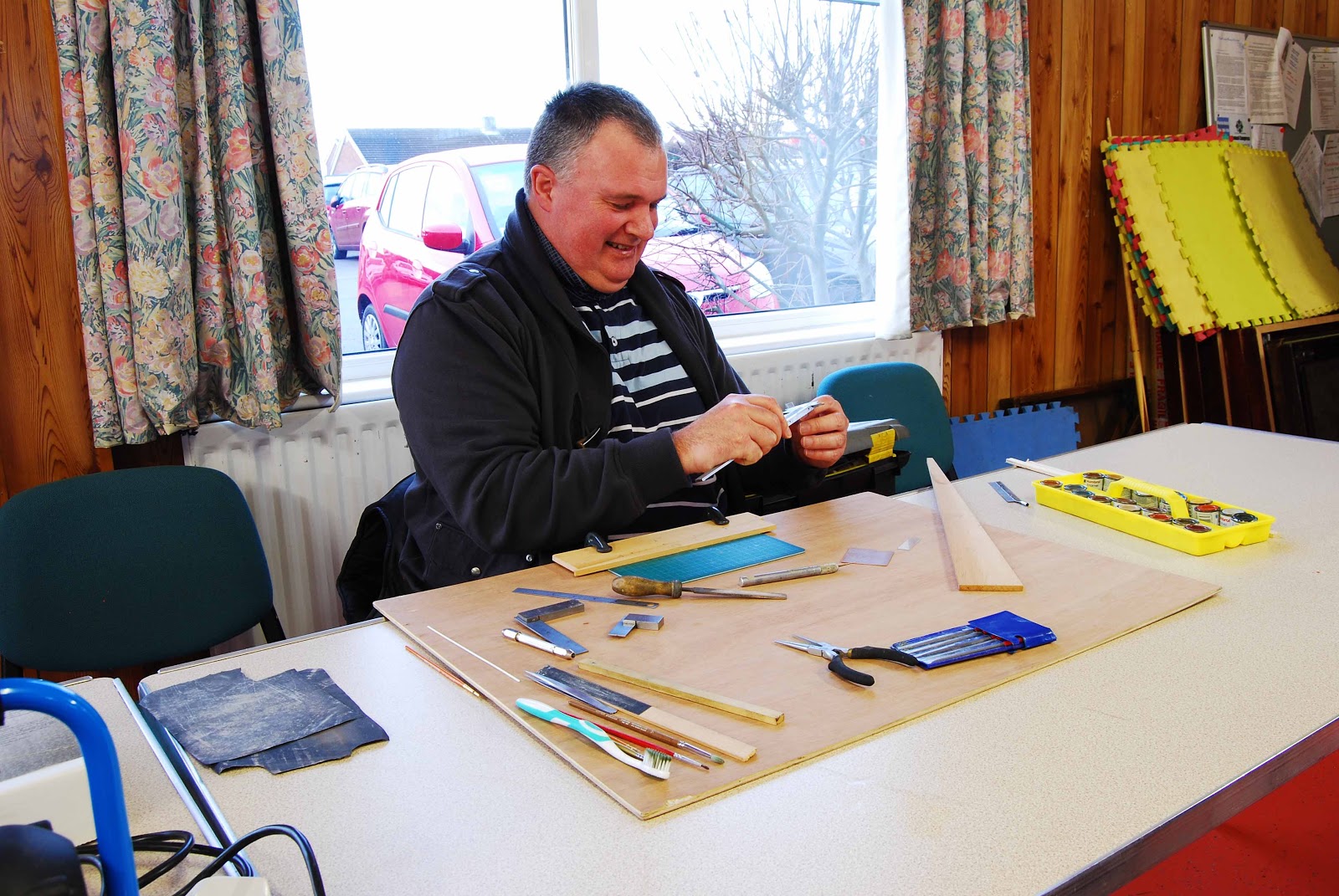 Now, some of the projects that were brought along.  Below - Anthony Yeates's Corrieshalloch 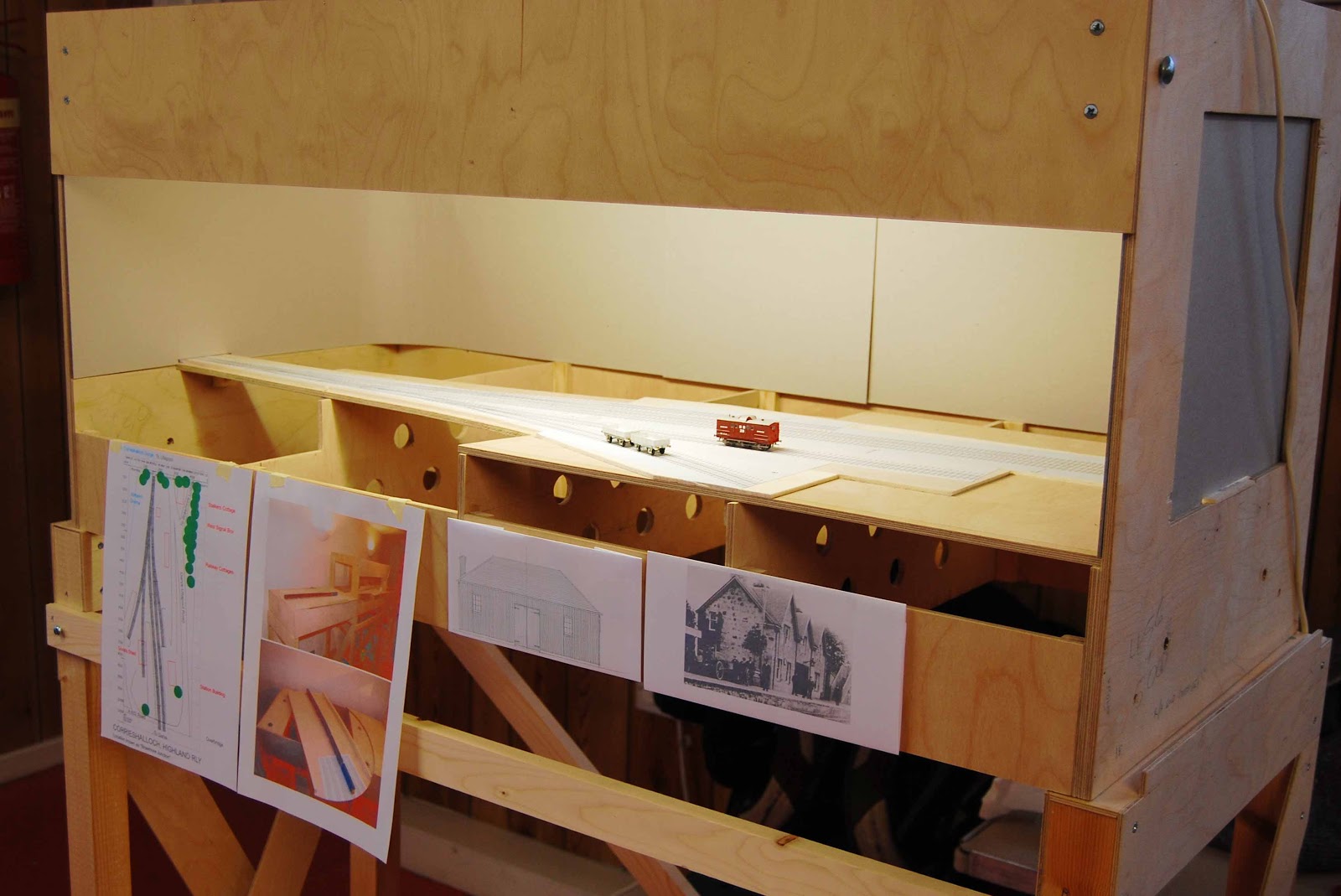 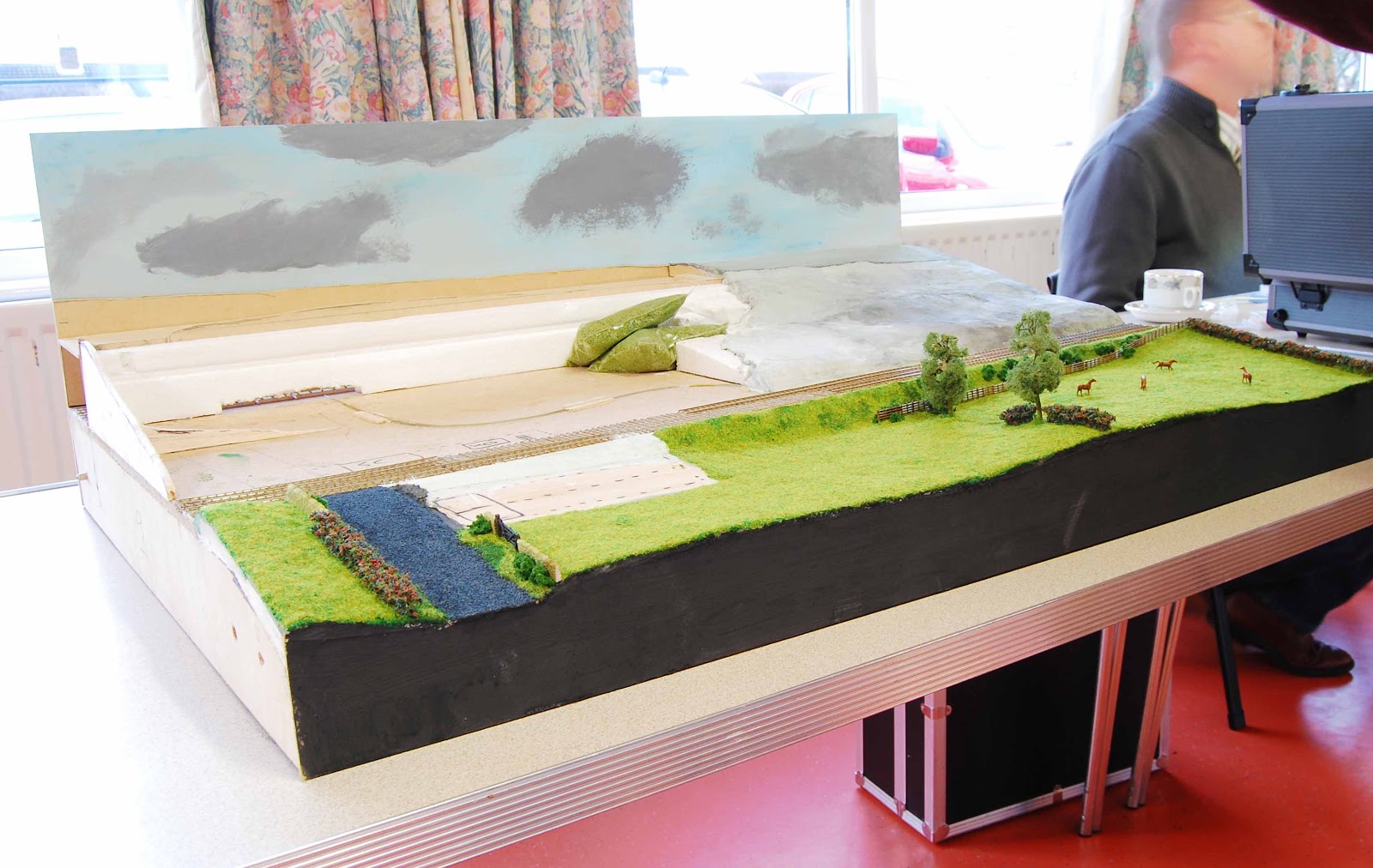 This is the start of a foamboard layout by Bob Greenlees, together with the book from which the inspiration came. 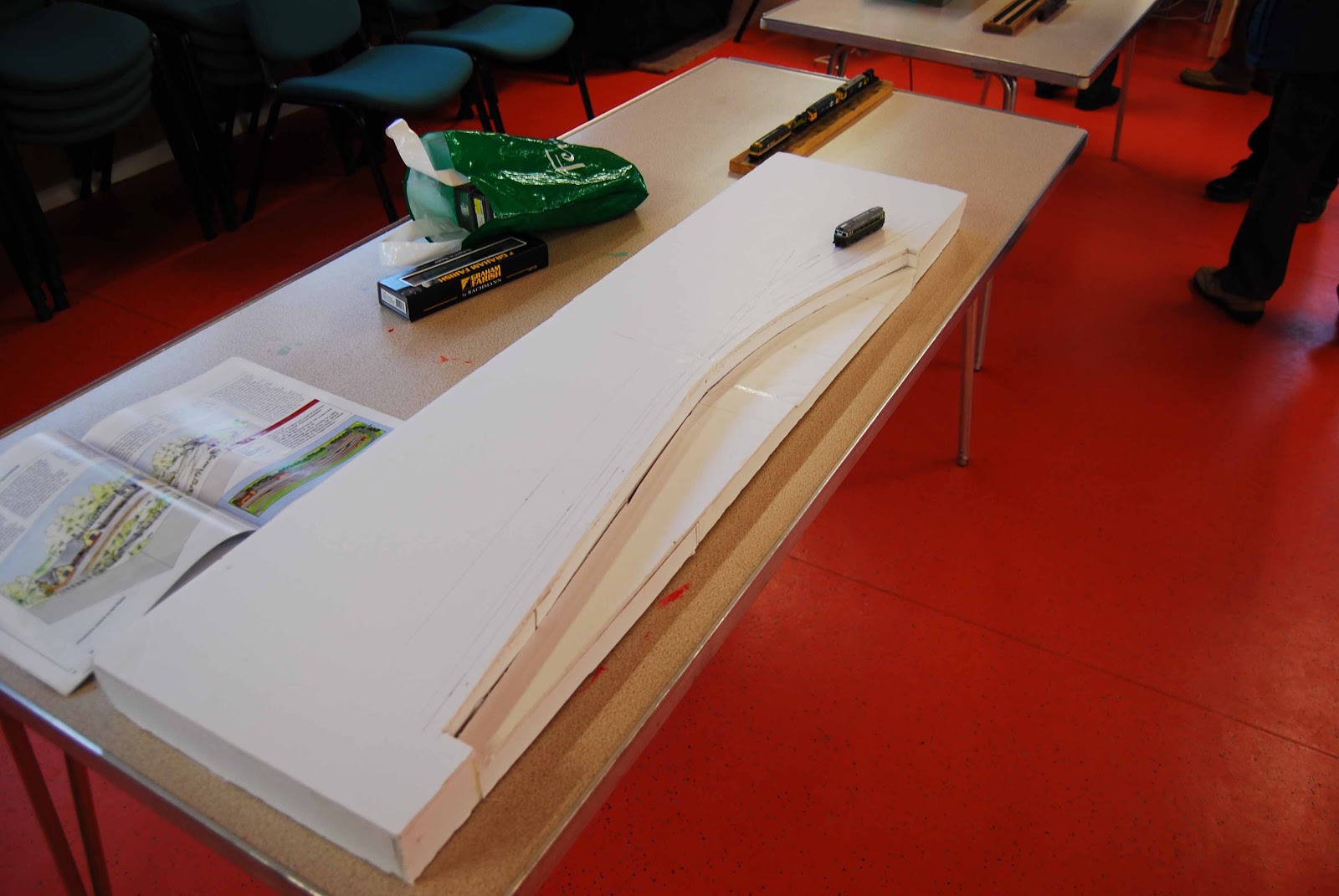 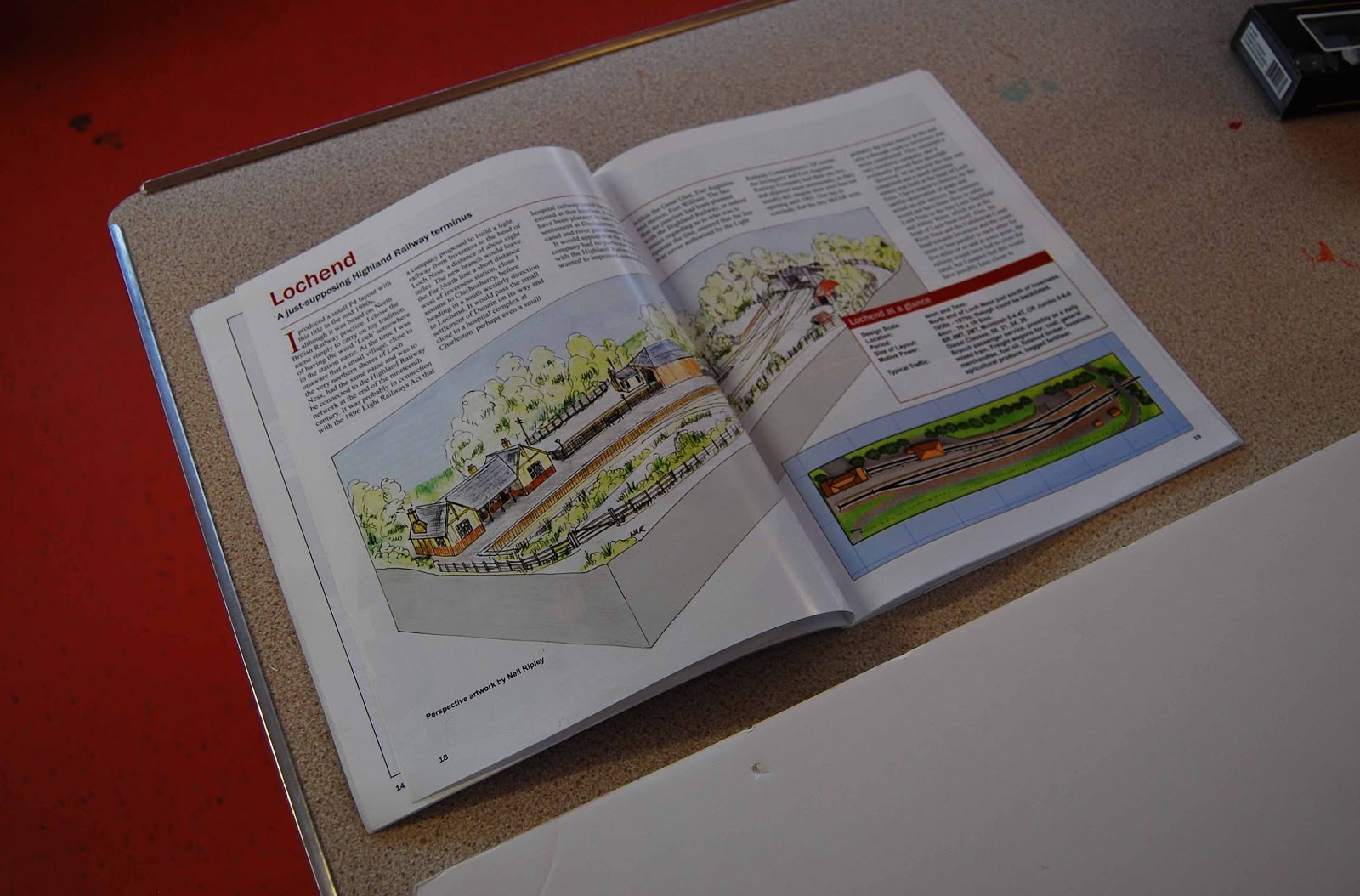 Now here's something of an interesting project by Chris Mills which I do hope he shares with the rest of the membership at large through the 2mm Magazine pages. It will be constructed in a number of phases and is based on the jigsaw baseboard philosophy. It may just be possible to discern the phases from study of the second picture. 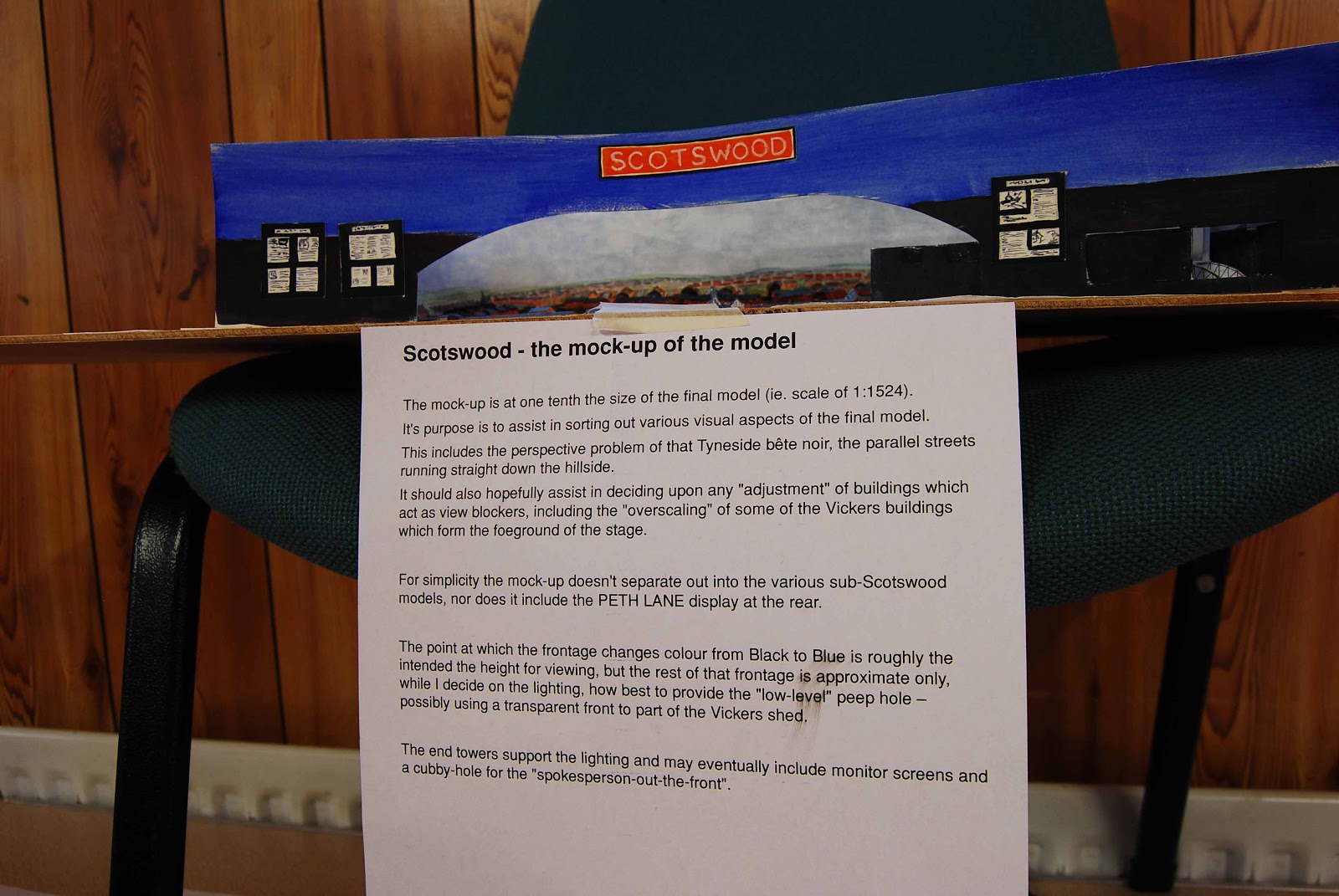 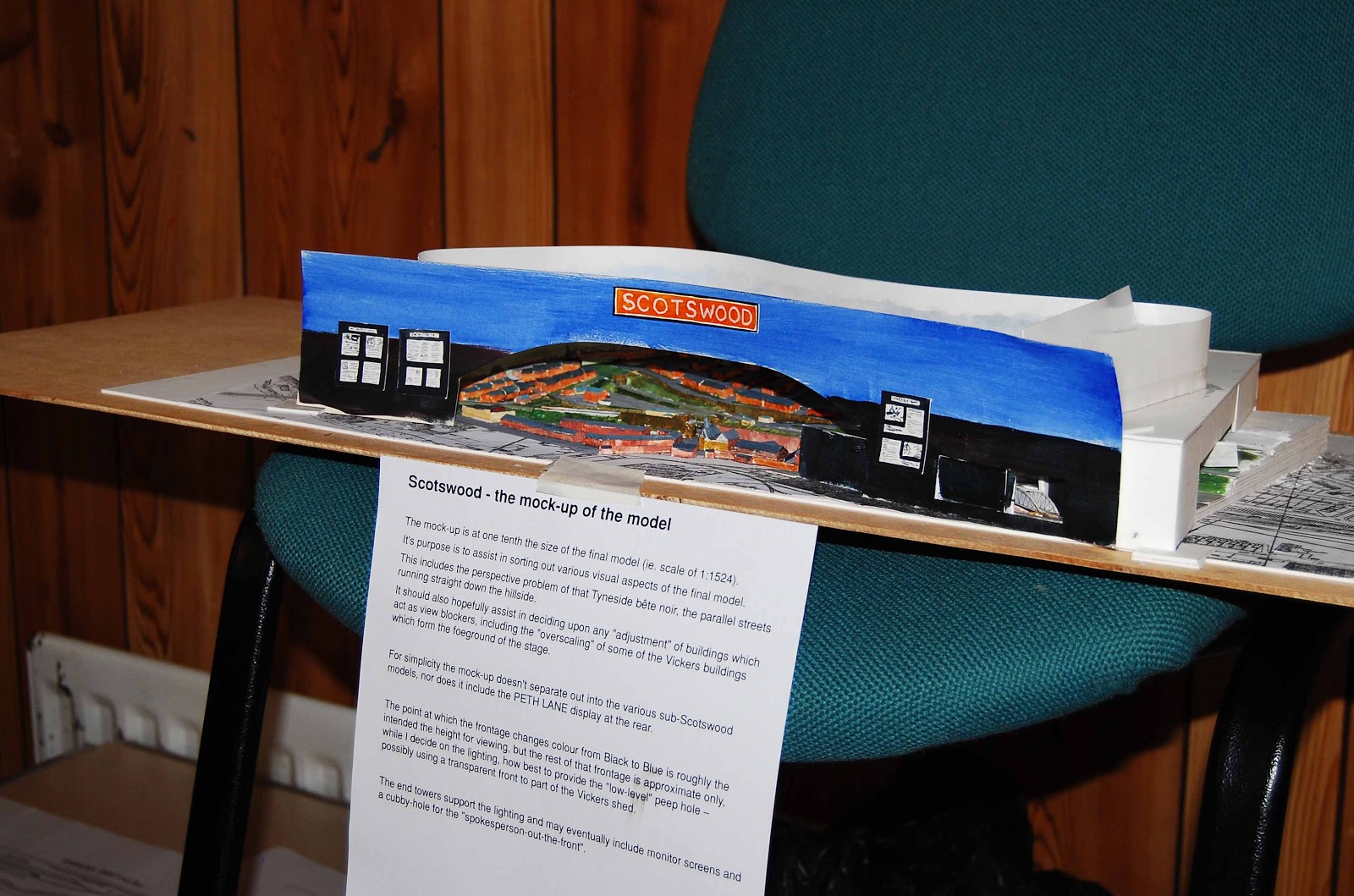 Here is a locomotive (alright it's GWR) that has been converted to 2FS by John Aldrick using the latest Higgs designed 2mm Scale Association conversion chassis etches. Viewers may have seen this locomotive in monochrome in a recent Newsletter. 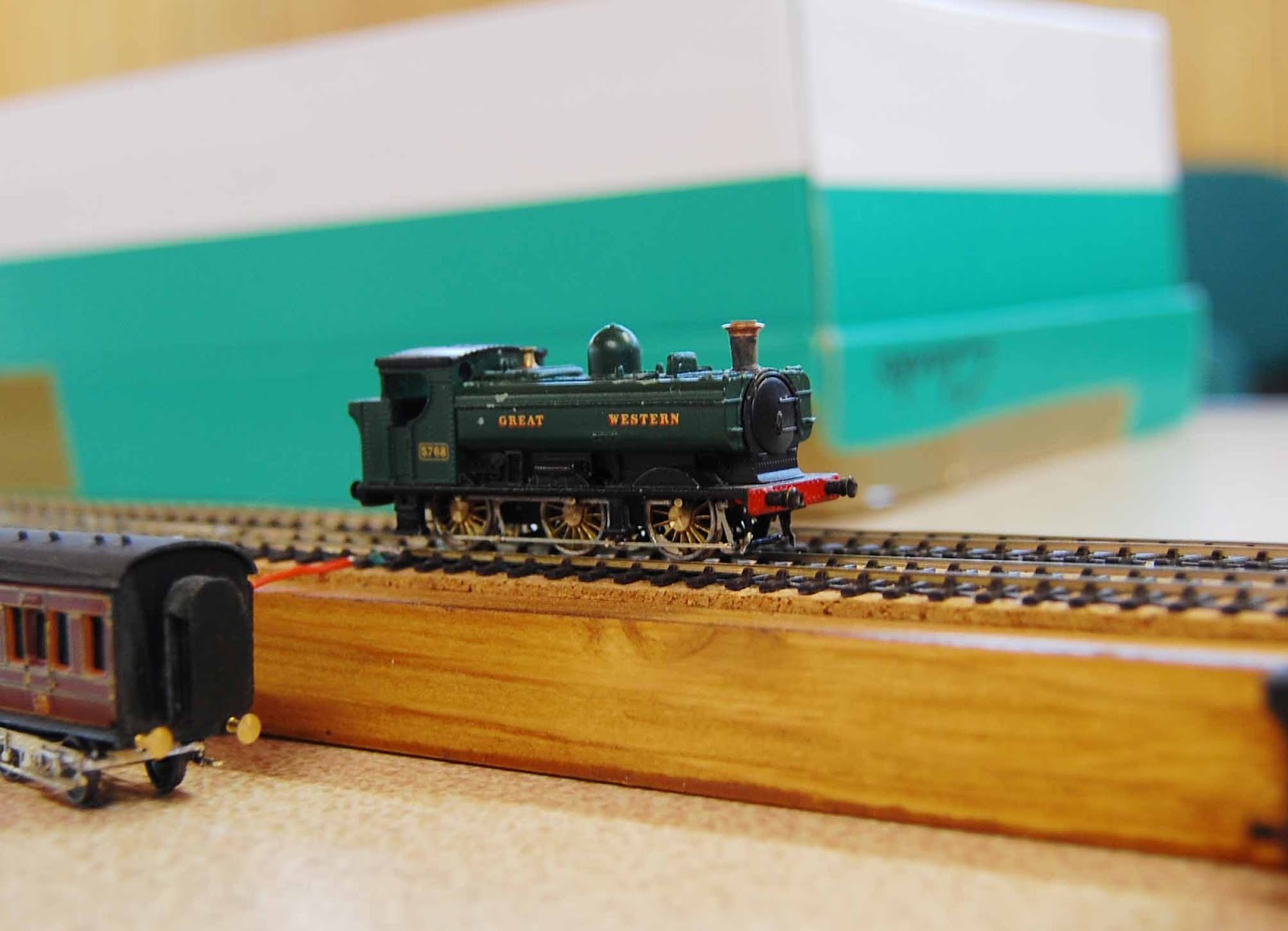 A couple of Ted Burt's diesel locomotives are below. 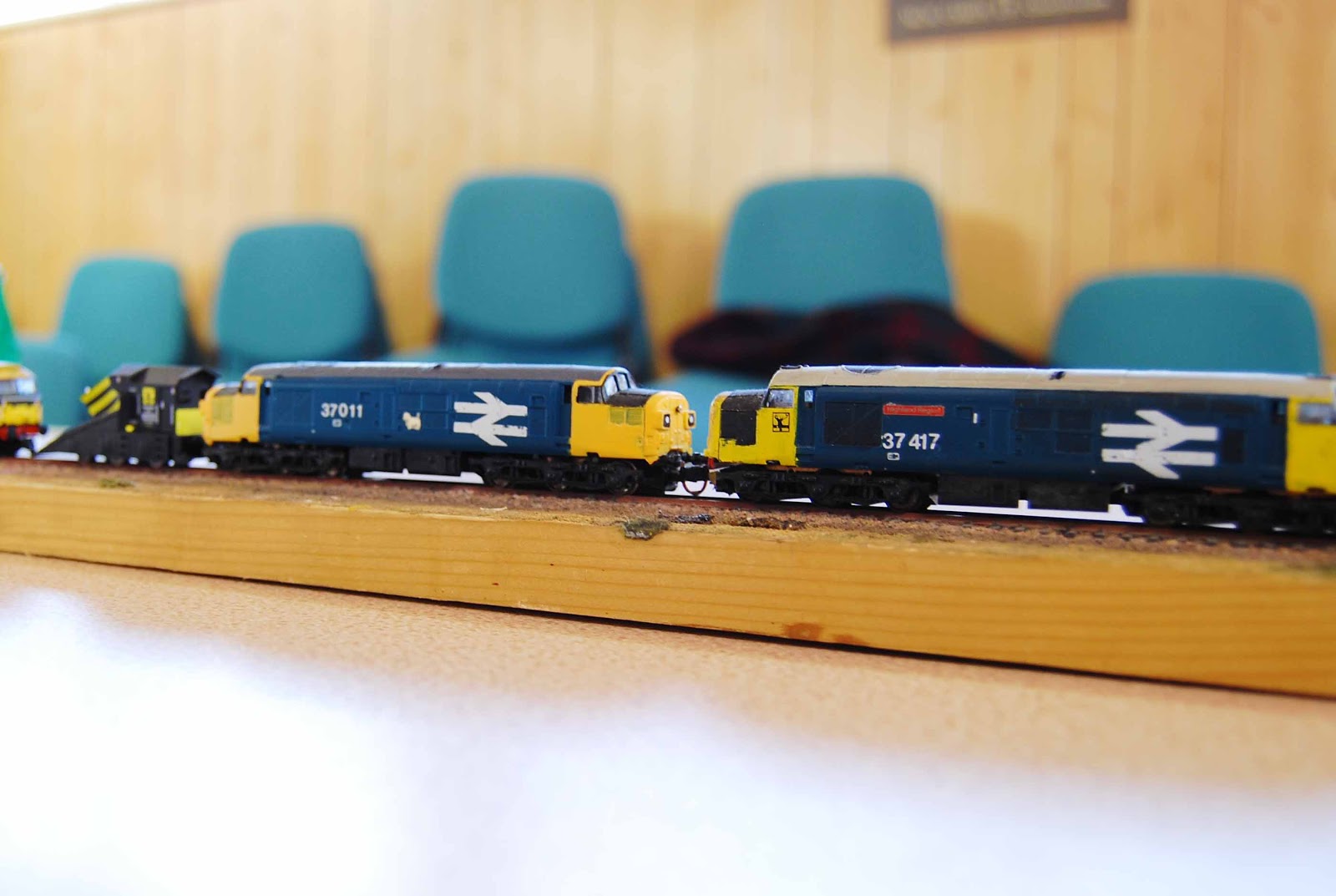 Here is a weathered example of the latest (and many regard as the best yet) locomotive from the Bachmann stable. This one, owned by Alan Whitehouse, has been weathered by Tim Shackleton and because my photograph is a little on the dark side I have included a shot taken by Tim himself which shows what a cracking job he made of it. 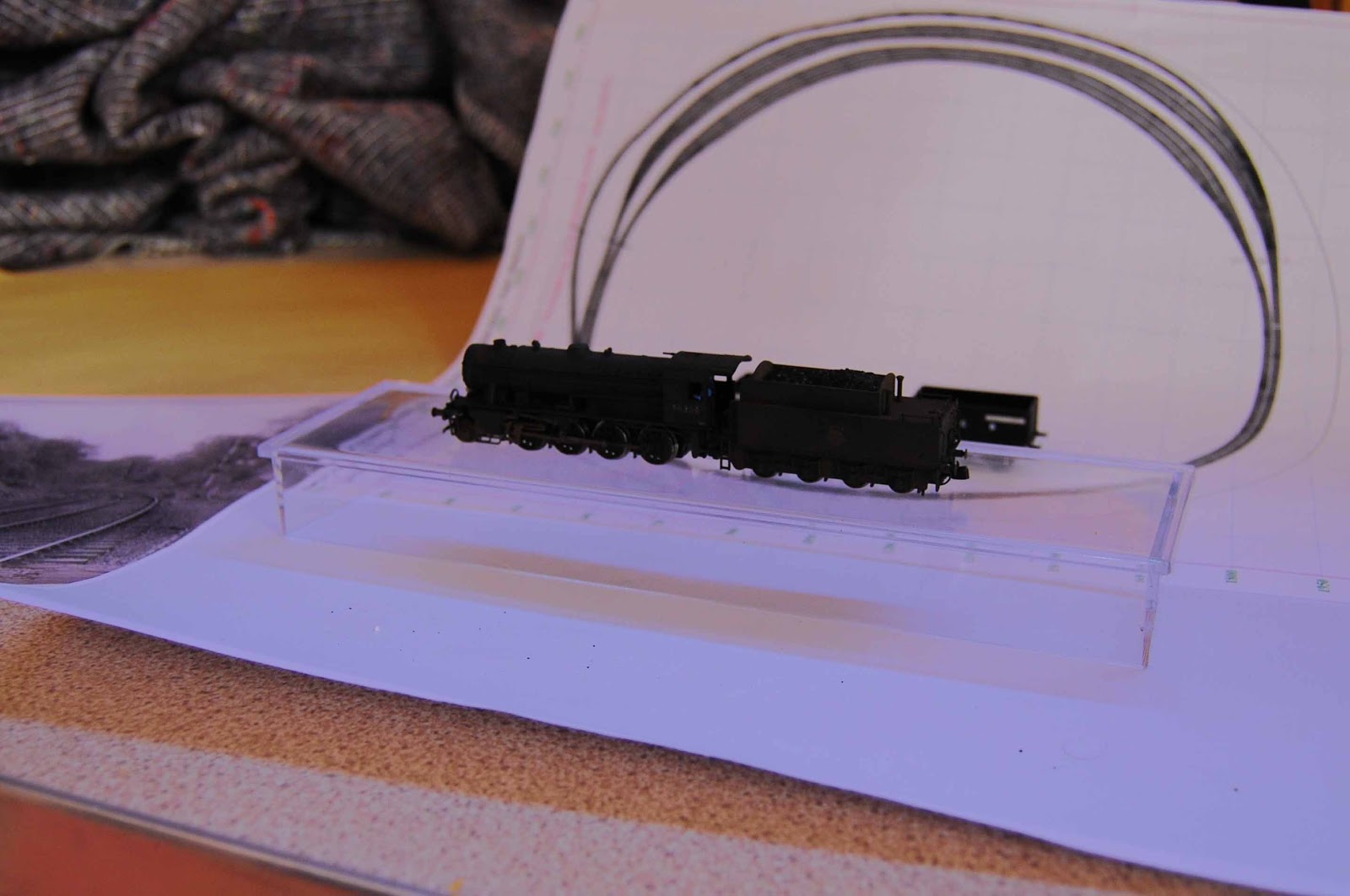 Below we have some my own recent efforts. As many will know I am also interested in the modern railway and here are some examples of a weathered Bachmann class 158 DMU expertly done for me by Tim S. and in the same picture the test build of the 2mm Scale Association Locomotive Kit No 1, the 08 (which I did some time ago) accompanied by on its left by the Higgs conversion of the present Bachmann model as yet incomplete and on its right the N10 which is being documented within this blog. It was supposed to be into at least undercoat by now but I didn't manage to get the time do it prior to the meeting. 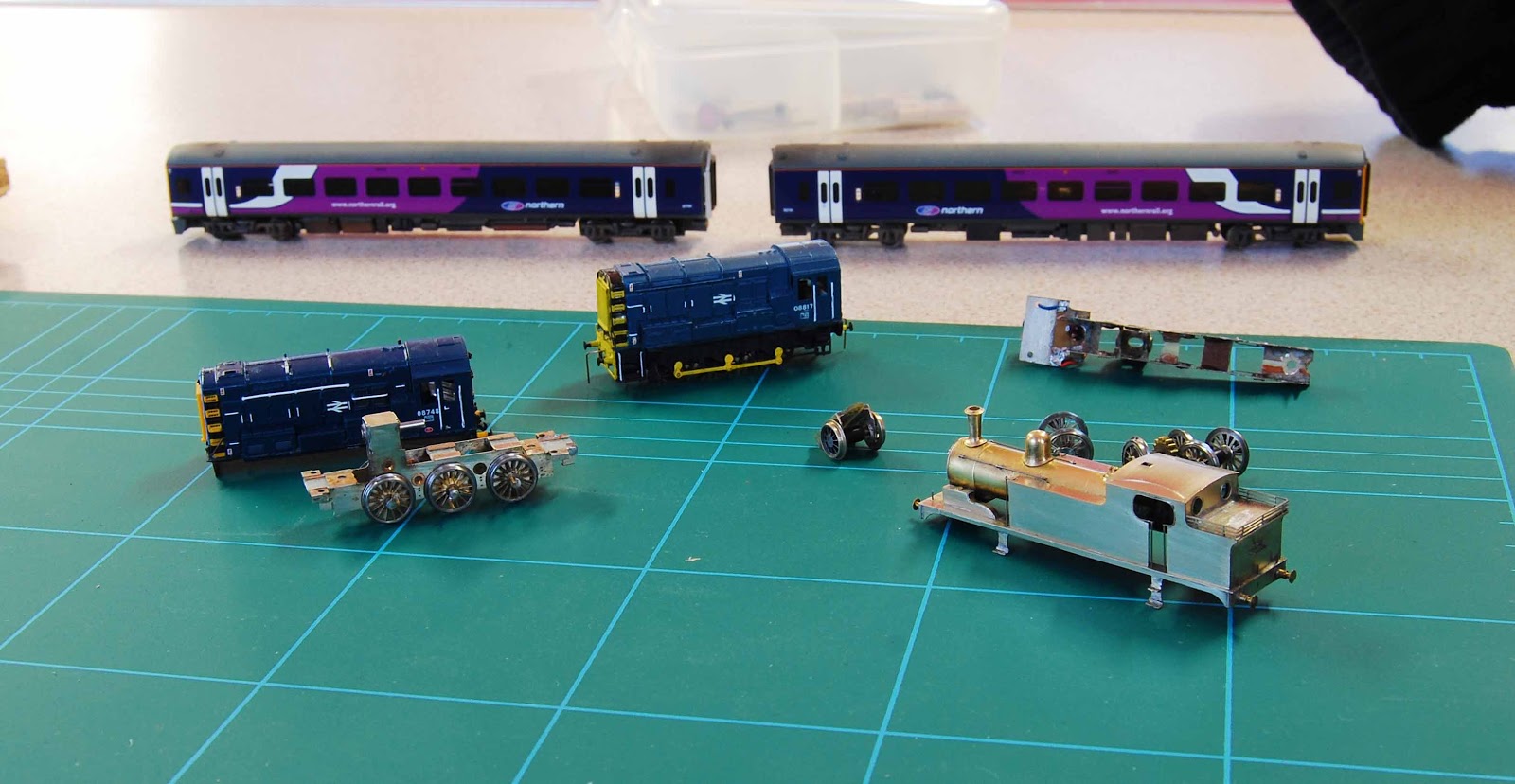 Below is a gem. This is a locomotive built many years ago by, we believe, Peter Westwater. He was the 'Westwater' in 'Westwater & Kirk'. Alistair Mearns bought the loco quite a few years ago and only re-discovered it recently when having a 'tidy up.' I know, it's off the track but it was a bit dark when the picture was taken. I'm sure we'll see this locomotive again......! 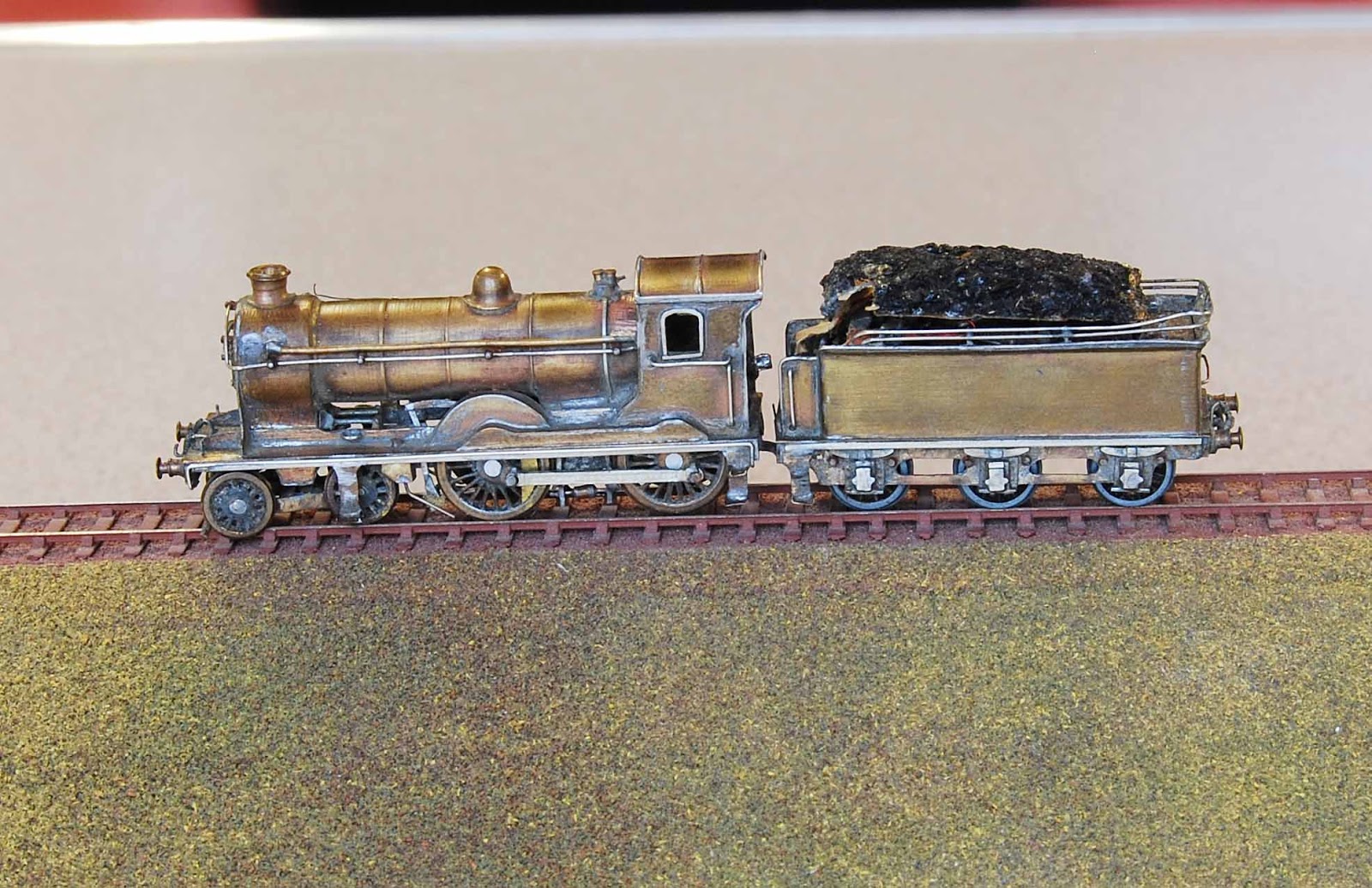 Below we have four more examples of the kind of 2mm lorries that this scale has been badly lacking until quite recently. These are new releases and the Pickfords low loader in particular is finished to a very high standard indeed. The rest are pretty good too. These will be available from Graham Eason as well as elsewhere so watch out for them. 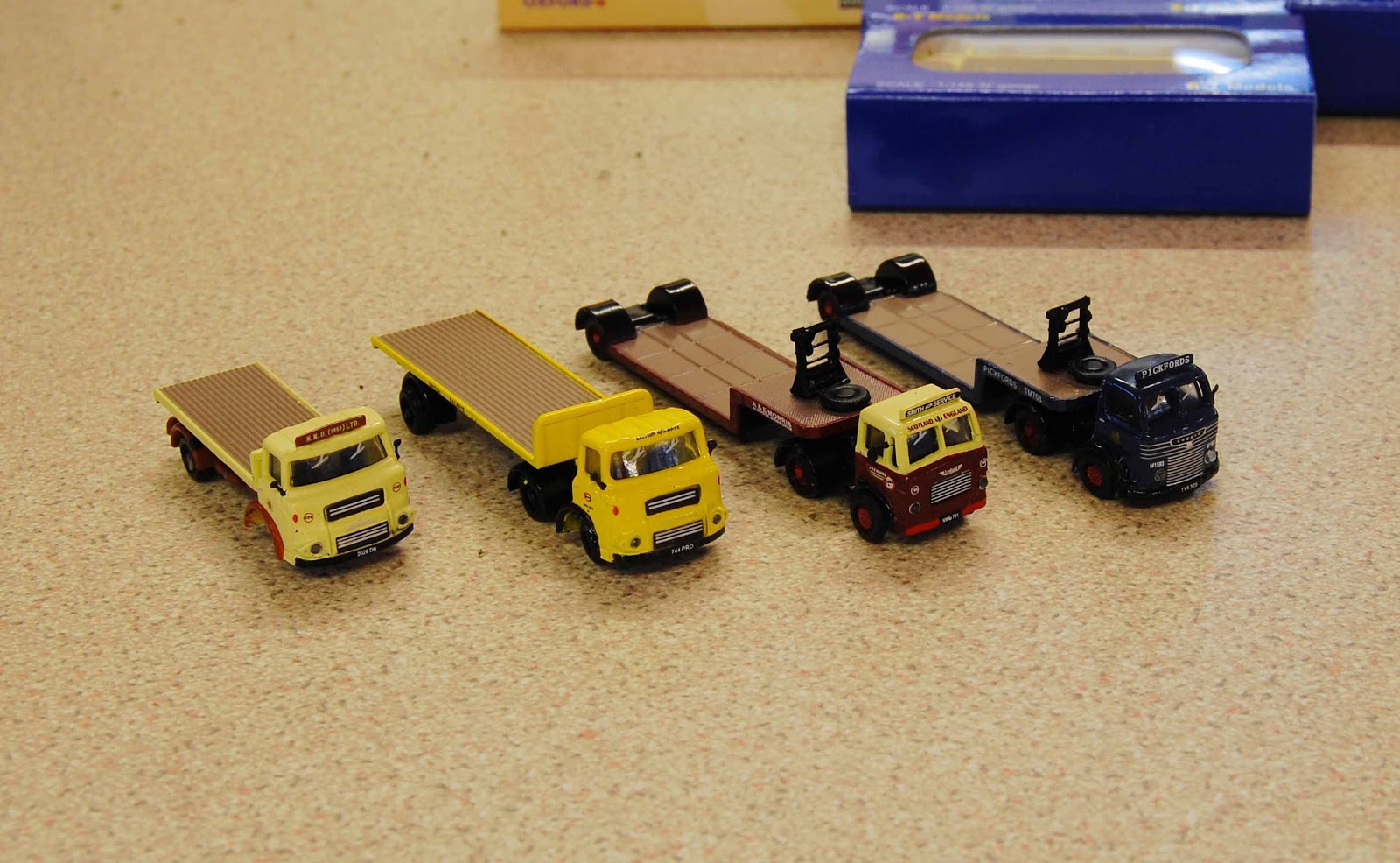 As you will all realise, all of this activity in one afternoon makes us hungry so this is what we had to consume before we we able to go home. This is the spread before the pizzas and quiche were added. Our thanks to the girls for looking after us for another year They are, in alphabetical order, Audrey, Gerry, Gilda, Margaret, Sue and Yvonne. Sorry I didn't get them altogether at the same time for a picture. 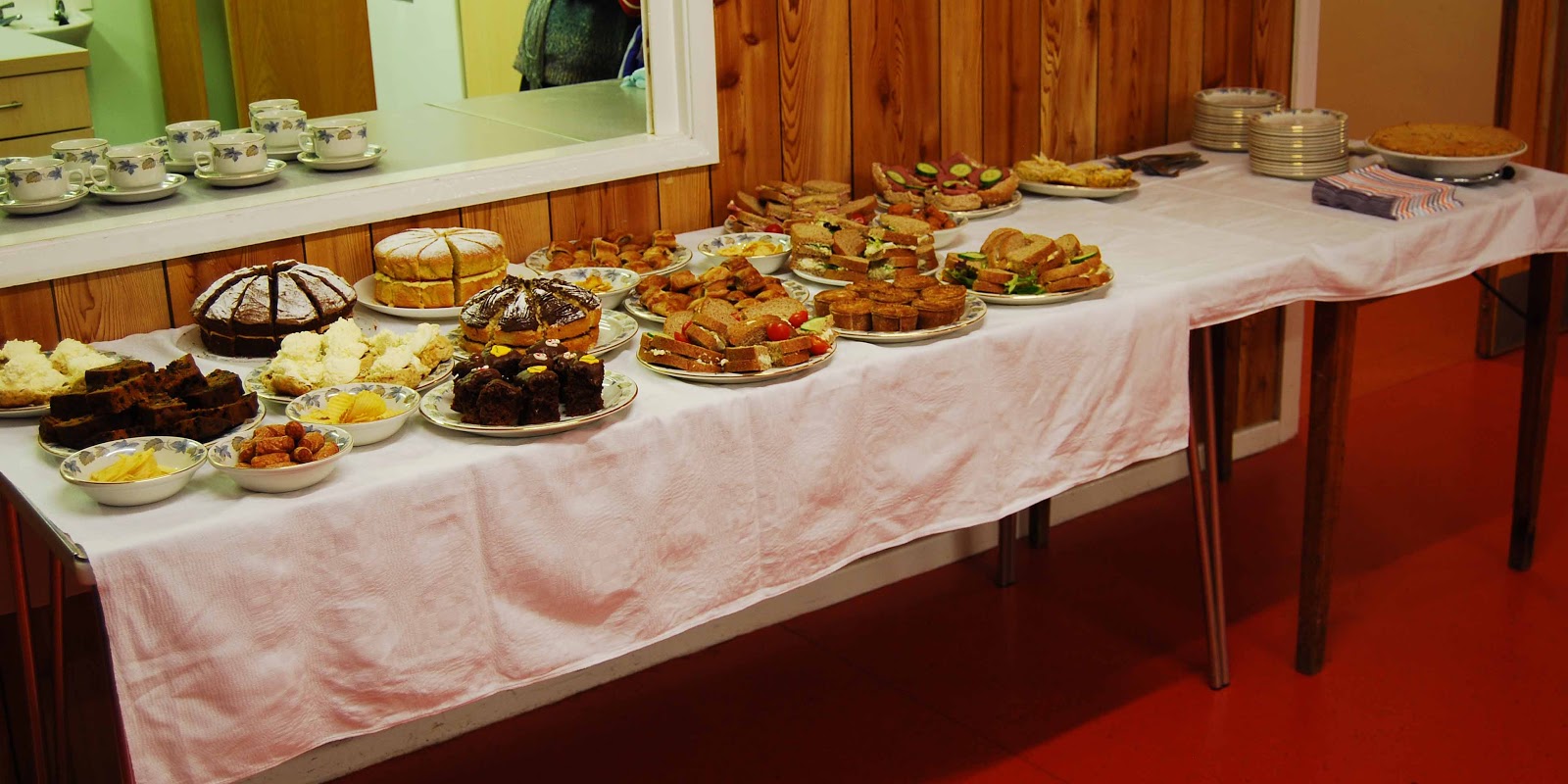 Marry Christmas to everyone from the members of NEAG.
Posted by Mick S at 22:36