Since I last posted about the LNER/BR N10 there has been a little progress as can be seen from the attached pictures. 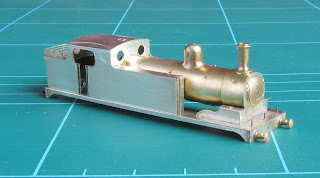 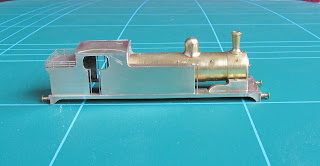 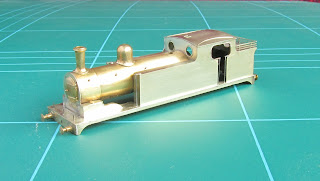 The cab spectacles were a bit tedious but patience and a steady hand brought a result. On the 4mm model these spectacle plates were in two parts, which is an unnecessary complication in 2mm scale so I chose to fix just one in each aperture, from the outside. Trouble is they needed to fit into the half etched recesses provided. They all needed to be slimmed down in order to fit the recess. Well trying to file them would not be without its problems but I used an old paintbrush to push the little etched circles over and this gave a firm foundation on which to carefully file a small amount from around the entire circumference. Very therapeutic.......!

The coal rails went on really well (I thought) and since the last you saw this engine the chimney, dome and smoke box door have been added along with tank front and cab handrails, cab roof, buffers and lamp irons. Castings come courtesy of Bob Jones at Fence Houses Model Foundry they are in fact J72 castings. Not a million miles away from what is required for the N10 and wholly acceptable in my view.

I'm happy enough with the result but you judge for yourselves from the pictures.

For the future I have a bit of a problem with the radial truck. I leave you to guess what's gone wrong and maybe next time I will be able to report how I put it right. No pictures of that just yet because the problem is not solved.