The loco workshop organised by Edward Sissling went ahead as planned at his work premises in Bradford on Saturday 28th April 2012.

No less than thirteen members gathered for the event which commenced at 10.00am. Seven of those present brought along a locomotive chassis project on which to work. Mostly these comprised Fence Houses Model Foundry generic 0-6-0 etched chassis and a Nigel Hunt etched design chassis.

Only one of the chassis had been started beforehand and it is fair to say that in the time available everyone completed the early stages of construction i.e. removing and cleaning the etch from the sheet, fixing in place the phosphor bronze bearings with phosphor bronze spring pick ups, (Simpson Springs) sweating together the side rods, assembling the side frames into the loco frame assembly jig and cutting/fixing the PCB frame spacers together. It could be said we had a good ratio of students to instructors but I don't think anyone who was there would have described it quite like that since it was just a bunch of like minded people who had arranged to be in the same place on the same day with their modelling kit.

It is true we had five people who had amongst them a good deal of locomotive building experience and just over an equal number of people who didn't, but the atmosphere was so relaxed and informal that although it might have been thought it could be described as a tutorial the truth was we all spent a most enjoyable and productive day. A special mention goes to Steve Dunkeyson who kindly gave of his time to bring along Shop 3. (I think he made a 'bob or two'.....!

A couple of pictures below give a flavour of what went on. For 2mm Scale Association members who have access to the virtual area group (VAG) a folder will be uploaded with more photographs taken during the event by Edward Sissling and Mick Simpson. 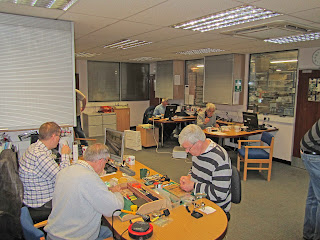 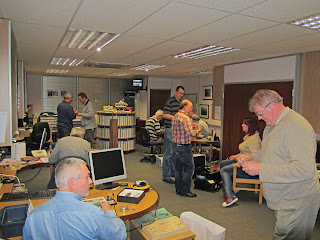 Without exception those who came along said they would come along again and continue the work.

Thanks to Edward for organising the day and locally arranging the refreshments. For the future those who expressed an interest but could not get to yesterdays event will probably have an opportunity to do something similar on another occasion.

Oh, almost forgot to tell you, this being Bradford most of us participated in the consumption of a curry at the conclusion. (yummy)