Rip it Up and Start Again

The backscene is almost there; one more end panel to fit (where the cutting exits the scenic area). I've now turned my attention to some more scenery. I mentioned last time that the ground foam was coming up and I intended using grass fibres. The first steps were taken on the right-hand scenic board. The outer embankment and fields have been started: 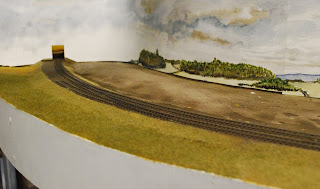 Meanwhile the left hand board and the cutting are getting a radical make-over. Not only have I removed the ground foam, but the cutting has been reprofiled; the section behind the bridge has been improved. Additionally, I have made the gullies, especially the outer one, more pronounced. Now you can see why that last backscene panel hasn't gone in yet! When this section was originally constructed I used powdered plaster mixed and coloured to remove the whiteness. I find this Polyfilla type product awfully awkward to use; it's either to runny or too stiff, it likes to slip down embankments, and so on: 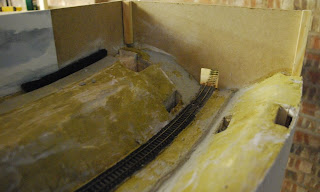 Now I am using a premixed lightweight patching filler, available from builders merchants in handy 2.5kg tubs. It is substantially easier to use and much lighter as well as being easier to carve/drill when solid.
It became apparent when using the grass fibres that the base colour of the scenery played an important part in the end result. Much of the layout is darkish brown from spraying the track, but the embankments were pretty rough from removal of foam. I've being using varying colours of acrylic paints to underlay the fibres. The back of the goods yard is straight onto the sprayed brown: 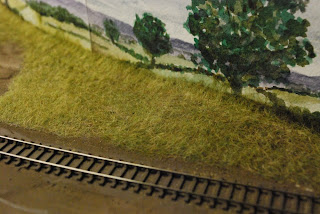 Similar fibres on the field to the left are over a base of Raw Sienna and Burnt Umber and as a result seem much lighter: 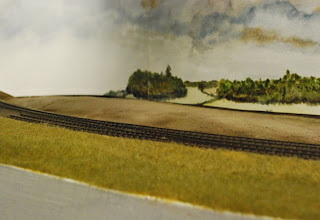 With a little practice the static shaker (a cheap version from Greenscene) is remarkably easy to use. Progress is being made at a pleasing rate. I am also working on making off-scene tufts of grass and weed for subsequent "roughing-up" of the grass areas. More soon...
Posted by Yorkshire Square at 08:19

I ordered the bigger static applicator from John Lloyd at Oxford but it has yet to arrive.

What grass fibres are you using? Make, shade, length etc

Does this artistic scenic process not require operator lubricant or is that out of shot?

The fibres are MiniNatur and I'm using Autumn, Winter and Hay shades in 2.5 and 4.5mm lengths. I've just sent for some 6.5mm fibres too; look at some of the hedgerow grasses which are easily 3-4ft high.

No lubrication was required for this process although I think I had a coffee later!