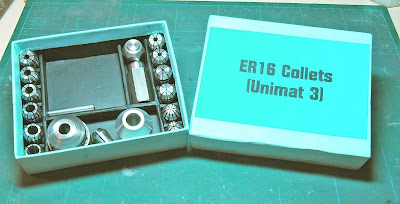 Those who attended yesterday were treated to an 'all bells and whistles' (literally) when Dave Boorman brought along his US acquisition of an American RTR diesel with on board sound decoder. The sound was quite impressive and, as I understand it, so was the price.
Also there to be viewed were all but two boards of the scenic scenic side of Bob Jones Fence Houses. It just fits into the hall with about a foot to spare.

The box making session went ahead and it wasn't long before I had produced the new box for my collet set. Those who were there may find the picture interesting. I have added little compartments in which to store the various items contained in the box so they don't slop about and given the inside a 'lick' of paint. Of course the same thing can be done with a stock box and as long as your trains aren't too long it's possible to store a complete train.