He's Off His Trolley

Whilst others have been beavering away on their GJLC entries, I can't claim to have done much modelling recently - the house has needed some work and the weather has been too nice to stay inside! A recent stint on the 2mm Association publicity stand at the York Model Railway Show has given me a bit more enthusiasm, and a few purchases were made from the traders at the show. One of these was a small etch by 'N Brass Locomotives' for a platelayer's trolley - the old type with a timber deck. When I got home from the show I unpacked the etch and had a quick look at it.For such a small item, there are a lot of parts - 16 etched parts plus a length of wire (to make the axles). Of the 16 parts on the etch, 12 are wheels (each wheel is made from 3 layers). 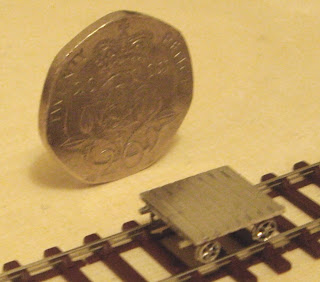 As there wasn't much on the telly last night, I plugged the soldering iron in and made a start. Afer an hour or so of work it was almost finished. Frustratingly one of the wheel etches disappeared into the carpet and 15 minutes searching failed to find it, so one of the wheels is thinner than the others! 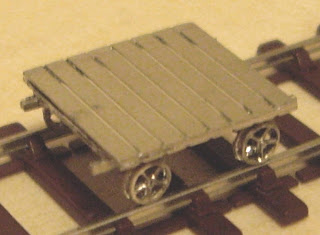 The wheels were assembled by dropping them over a 0.3mm drill in a pin chuck and placing tiny dabs of solder paste between the layers before heating with the tip of the soldering iron. I did manage to line-up the wheel spokes on the different layers, but making the wheels go round defeated me!
All that's needed now is a careful paint job, and then it's ready to be placed on my layout (when I get around to building one!).
Apologies for the poor quality of the photos - they were taken in a bit of a rush in poor lighting.