My 'Peak' now has a decoder chip fitted, in the shape of a Lenz Silver Mini (with cable harness). Whilst I appreciate the super-slow running that can be achieved with the likes of Zimo and CTE decoders, as so amply demonstrated by Nigel C and Nick M at the AGM, I find that Lenz Mini decoders serve me well. As impressive as it is for a loco to creep along at a yard every 5 minutes it's not usually something that we need to replicate on our layouts. In the real world time is money and most train operations at done as quickly as possible, even shunting operations. So all I need from a decoder are smooth stops and starts and a respectable but not super-slow speed at 'throttle notch 1'. Certainly having the majority of my fleet on one familiar decoder type helps when it comes to decoder tweaking. I do have a few examples of CTE decoders in stock and one will be going in my 04 shunter very soon, purely on size grounds.

The picture below shows the general arrangement. The decoder sits in the milled recess, tucked on top of a slip of black fag paper for insulation purposes. I'll probably replace this with PVC insulation tape before final reassembly. 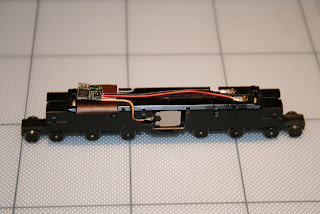 In the next shot you can see the orange wire connecting to the now isolatied motor, routed via the milled slots. 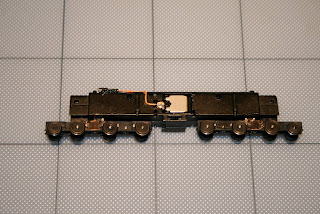 Here you can see the red and black pick-up wires connected to the two halves of the chassis block. The chassis block is drilled and tapped 12BA and a couple of terminal tags made from scrap etched nickel silver. 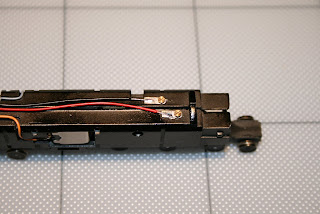 In the final shot we see the loco with body back on, undergoing testing and running in on a Bachrus rolling road. The cosmetic bogie outer frames have been left off so the wheels and gears can be easily observed. These are great if you don't possess a circular test-track or layout but don't rely on them 100%. At first the loco ran well on the rolling road but on the track had an intermittant and very annoying 'stall' whilst running on the first three throttle notches. I eventually stripped the bogies back down again and found a few tiny rags of plastic swarf on the rear faces of the wheels near the axles, left over from the wheel turning process. These were removed with a scalpel and the bogies reassembled, also paying attention to pick-up strip adjustment. Running is now good and it runs very slowly at throttle notch 1 without a stutter now. 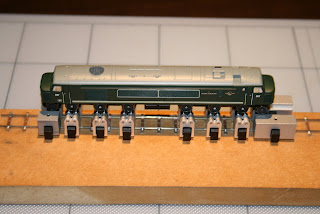 The only other problen I identified was that the outer pony wheels had insufficient side play on 24" radius curves, so I removed the previously installed limiting spacers. The pony wheels now actually just kiss the inside of the narrowed cosmetic side frames on 24" curves but not enough to stop them revolving or derailing.

Posted by Edward Sissling at 17:14