Nice to see others posting here. Thanks Geoff, I'll just put this quickie update on before you post some more.

Here is just one photograph of the class 31 recently weathered and, as you can see, it's now Thornaby based 31 283. Weathered, except for the windows that is - compare with the last picture on 22nd March, below. I think it is possible 31 283 might have had larger (Thornaby style) numbers at some time but I haven't yet seen a picture depicting that so I've gone for the standard size. 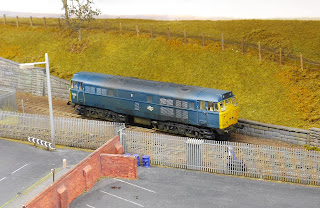 I might have a go at the windows when I feel my hand is steady enough to replicate where the screen wipers have cleared the glass... I initially wanted to have that faded blue look before adding the 'crud' etc and I think it's worked out OK I think there is always a danger of going too far and that's easy to do when applying weathering in other than natural light.

It clearly shows your subject loco at Thornaby with massive numerals on the side.

Thanks Jim, Mail on its way to you now.
Regards
Mick

A search on Flickr against the TOPS code will yield quite a few photos. There is i think even one of these replacing a class 47 on loco hauled Transpennine service at York.