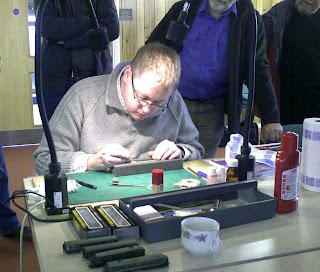 Thanks are due to Edward Sissling who brought along the 'T' cut, masking tape, cocktail sticks and BR number transfers together with his shed allocations book for the period 1948 onwards.

As the picture shows Edward did a demonstration of how to easily remove a proprietary locomotive number while we all watched. Following that we all, following his lead, (well those of us who came prepared that is) then removed the numbers from our chosen item of rolling stock. What a lot of Bachmann Class 24's there are about today......! My own loco now has a new identity of D5096 allocated to Gateshead shed in the very early 1960's. It has been taken away and is currently being sent to 'Santa' and I'll not be able to play sorry run it until Christmas morning. Huh....!

Clever use of masking tape and 'T' cut soon did the trick after which it was simply a matter of adding digits that represent the new number. Realy quite simple - and painless. For one of our new year meetings Edward is going to show us how his locomotives are weathered. This is something that has attracted favourable comment so he thought it would be worth a session.

We look forward to it.

Would Edward consider showing via the 2mm Magazine, how he removes the numbers and does his weathering? I'm sure a lot of us would benefit from his knowledge. Thanks.