At long last the work to put the long promised extension on Wansbeck Road has begun.

As you will see from the pictures the small nine inch section at the bufferstops by the station building has come off. This why it was built in the first place, so that I could easily remove it and extend the layout and facilitate through running. That was always going to involve a second 'train table' since for logistic reasons I didn't fancy a tail chaser of any sort.

The first picture shows the bufferstops end as it has been for some considerable time now. I have planned for some time to alter the course of the roadway and drop it down beneath the railway to add extra interest. In addition I wanted to expand the road vehicle theme and include a bus depot near the scenic break. Well, space is always at a premium and I thought I was going to have a little more than I have so some rationalisation of the plan has occurred. The road is still projected to go beneath the railway but planning permission for the 'bus depot' has been refused....! As I write this I am not yet happy with the gradient the bus has to climb and some 'levelling' may be necessary. On the subject of Faller buses I was contemplating purchase of another vehicle but since I bought the last one the cost has risen by £35 and is increased from £62 (which I thought was a bit on the high side even then) to between £94 and over £109. That's some percentage hike. Back to scratchbuilding and maybe a different form of propulsion.

The second picture shows the new baseboard in place during construction. The gradient can clearly be seen. 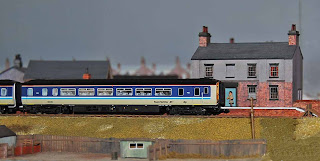 The last picture is...............possibly the shape of things to come? No. Not at all; it's just me building up my stud for the diesel period layout.